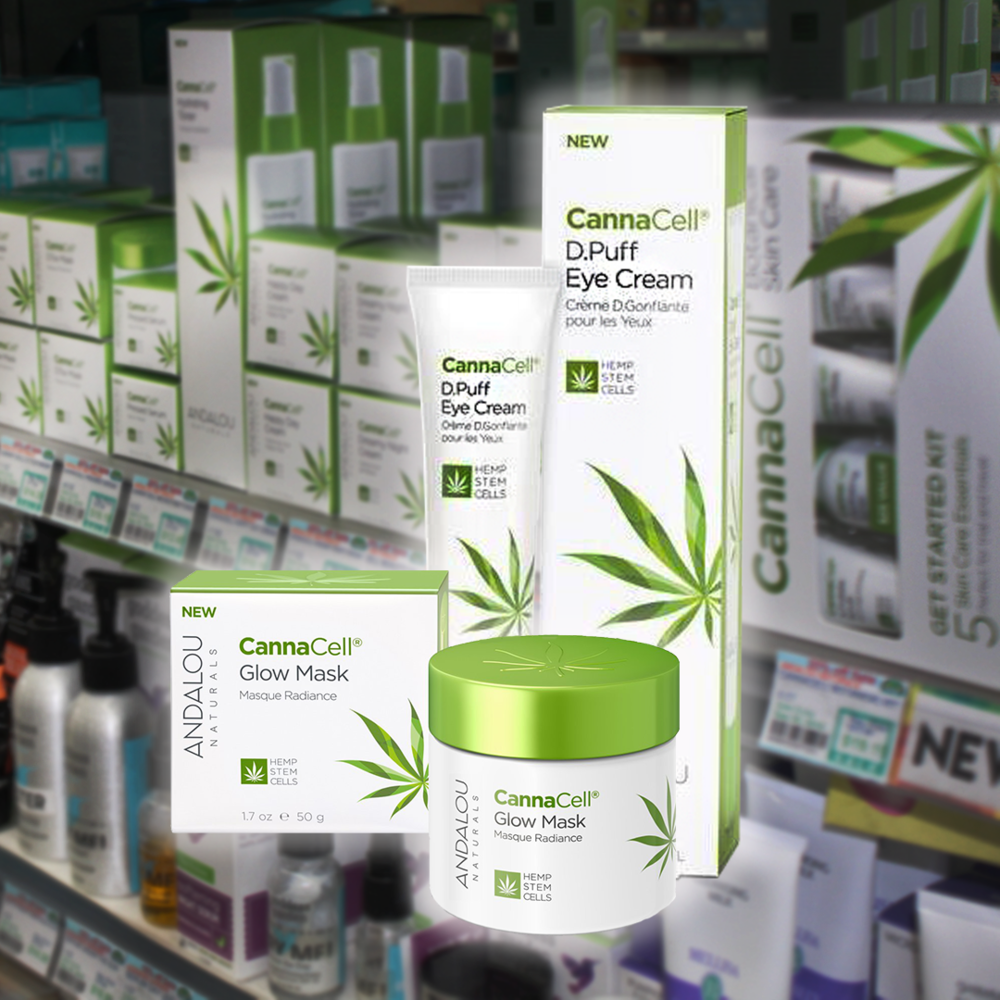 CannaCell® by Andalou
Amplify your natural beauty with our new botanical CannaCell® Range! Our THC free, CannaCell Hemp Stem Cells are extracted from the mature stalk of the hemp plant and works to counteract free radicals, oxidative damage, sun exposure and pollution, promoting optimal health of the skin. CannaCell Hemp Stem Cells are blended with 100% pure, organic Hemp Seed Oil, rich in vitamins, proteins, and omega 3 and 6 fatty acids to soothe distressed skin, enhance water retention properties, and improve the skin’s natural defense for a healthy, restored, glowing complexion. Cannabinoids are almost exclusively found in cannabis, and have been shown to have a significant effect on chronic skin conditions

Cannabinoids (CBD) can come from medical marijuana plants or from industrially grown hemp plants. Both are varieties of Cannabis (Cannabis sativa), but they are grown for different purposes, and each one comes with its own legal status. CBD extracts, which are produced directly from cannabis flowers, are up to 15 percent CBD (150,000 ppm). CBD extracts can be produced indirectly from hemp manufacture as a by-product of the flowers and leaves that are mixed in with the stalks during hemp stalk processing for fiber. CBD from hemp plants are usually only 25 ppm (vs. 150,000 ppm from cannabis flowers). Cannabinoids and Skin Health First isolated from cannabis in 1940 by Roger Adams, the structure of CBD was not completely understood until 1963. Early studies resulted in the accepted view that THC was the “active” principle of cannabis and research then focused primarily on it to the virtual exclusion of CBD. This was no doubt due to the belief that activity meant psycho-activity that was shown by THC and not by CBD. In retrospect, this was unfortunate since a number of actions of CBD with potential therapeutic benefit were downplayed for many years.

Cannabinoids are almost exclusively found in cannabis, and have been shown to have a significant effect on chronic skin conditions. Cannabinoids are wellknown to play a role in regulating inflammation, and this may be the key to their ability to treat eczema and psoriasis. It is well-documented that the gastrointestinal tract, which, like the skin, is one of the primary physical barriers of the immune system, has abundant cannabinoid receptor sites. Now, research has shown that the skin also has an endocannabinoid system of its own, which helps to regulate the production of various hormones and proteins, including cytokine, which is also involved in the immune response. The skin’s endocannabinoid system also helps to regulate various cellular processes including proliferation, differentiation, and apoptosis or cell death. Thus, imbalance of this system may also be responsible for the occurrence of chronic skin conditions such as psoriasis and eczema, and developing targeted cannabinoid therapies may help to control them. Some Research has show that cannabinoids can play a role in inhibiting the production of skin cells or keratinocytes in the top layer of the skin. Because over-production of keratinocytes is involved in psoriasis, these results should lead to further investigation into cannabinoid therapies to treat psoriasis.

In other research, published in The Federation of American Societies for Experimental Biology (FASEB) Journal, it was shown that cannabinoids produce lipids that can regulate skin conditions such as acne vulgaris, seborrhea and dry skin. They suggested further exploration of cannabinoids as “novel therapeutic tools” to treat dry skin. Another study’s results suggested that the involvement not only of cannabinoid receptors, but also of other inflammatory end-points targeted by phytocannabinoids, were important in the regulation of dermatitis in mice.

In summary, we have many studies documenting the contributory nature of cannabinoids, their receptors, and the skin’s endocannabinoid system in the metabolism of psoriasis and eczema and other inflammatory diseases, of which aging of the skin is considered one. In the coming years there is great hope for the use of targeted cannabinoid therapies to better control these chronic skin changes.

What is the Best Way to Take Collagen?

Rosehip
← So Many Supplement Options: Which One Is Best?The Many Functions of Prebiotics →